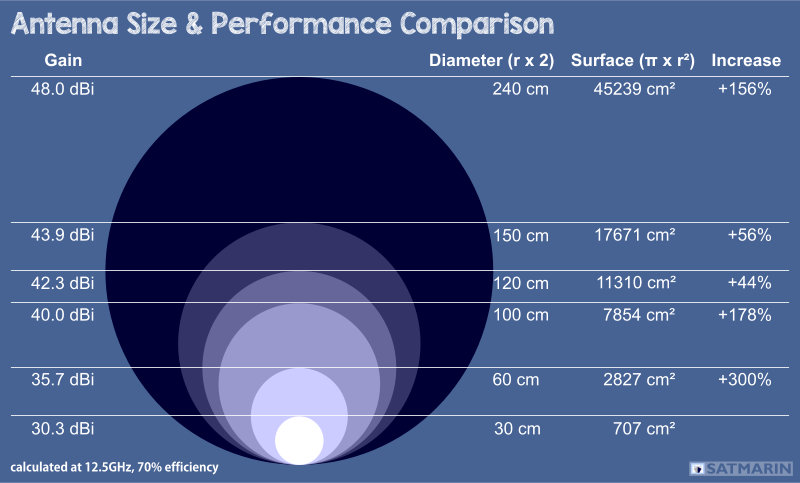 … and even though you might prefer the smallest possible satellite antenna you might have a different opinion after reading why the antenna size is REALLY important.

There are several ways to use satellite communications for internet connectivity yet there is a simple rule which is often not mentioned. The larger the antenna the lower the connection cost and the more coverage you will get.

Of course not everyone will have the possibility or the need to install a 1.0m Ku Band satellite antenna to occasionally check email but once you need more bandwidth or better coverage a larger antenna should be the way to go. With larger antennas you can:

The industry standard for maritime data communication via satellite is pretty much set to 100cm. Anything below that can be considered small to ultra small.

As an example we will take a ship operating in the Mediterranean with a 60 cm antenna (60 contour) or a 100cm antenna (100 contour).

The smaller antenna will limit the region in which you can be connected. Once you are outside of the contour for your antenna it will no longer work. Keep in mind that when the weather becomes bad (e.g. heavy rain, which attenuates the signal strength) your coverage region will decrease even more.

If you are an occasional single user and you only use your internet connection for sending emails and limited browsing then you will most likely be quite happy with a smaller antenna. The airtime cost might be a bit higher but it will not justify the higher cost of the antenna.

However, if your yacht can accommodate many and requires a higher bandwidth to offer browsing, email, phone calls, YouTube, Facebook, video on demand, video chat, gaming … for a multitude of connected devices, then the benefit of a larger antenna will quickly become obvious

Let’s add some real life figures to that

The price difference in airtime becomes important when you are going to require higher internet speeds. The initial benefit of saving on a lower cost antenna would in the example below be paid little over 3 months and you will have enjoyed a better service.

A difference of nearly €3000 per month… you can do the math.

Next time you are thinking of the size of your antenna and which service provider to use … remember … Size Matters, and yes in this case Bigger is Better

Prices above are based on current prices (2015) and given as an indication only. Always check with your service provider whether they offer different monthly subscription prices for different antenna sizes.

*Adjacent Satellite Interference: smaller antennas have a wider beam angle and can interfere with other satellites than the one you are using, you would then no longer be allowed to use this antenna on a specific satellite because you are disturbing the satellite next to it.