Rome, 20 November 2013 – Poste Italiane and Eutelsat Communications (NYSE Euronext Paris: ETL) today signed an agreement that will significantly contribute to the digitalisation of Italy and the reduction of the digital divide. The agreement to commercialise the Tooway satellite broadband service was signed by Massimo Sarmi, CEO of Poste Italiane and Michel de Rosen, Chairman and CEO of Eutelsat in the framework of today’s Franco-Italian bilateral summit in Rome in the presence of Enrico Letta, the Italian Prime Minister and François Hollande, President of the French Republic.

This new step transforms the broadband landscape in Italy where 2.37 million Italians in 3,600 towns and villages* are still unable to benefit from a quality Internet connection for education, entertainment, communication and e-commerce. The Tooway service will be available locally through Poste Mobile in Poste Italiane offices and through their business sellers, with the priority to serve regions beyond range of terrestrial broadband from first quarter 2014.

The Tooway service works in conjunction with Eutelsat’s KA-SAT satellite, enabling users to easily connect to the Internet anywhere and benefit from download speeds of up to 20 Mbps and upload speeds up to 6 Mbps. The service requires a small dish and a satellite modem connected to a computer. The dish can be self-installed or by one of the 4,000 installers across Europe that have been trained and certified by Eutelsat, of which over 1,000 are located in Italy. Using the same dish, Tooway also offers features that include multi-channel television and VoIP for full triple play, as well as a wireless home network.

“This agreement with Eutelsat opens a new chapter in the Poste Italiane’s commitment to progressively bring digital services across the country,” said Massimo Sarmi at the signature. “The Tooway technology will soon be available to connect large areas of Italy unable to benefit from the terrestrial broadband network. The goal of this partnership with Eutelsat is to help reduce the digital divide and bring individuals and businesses the opportunity to fully develop e-commerce and cloud computing services.”

Michel de Rosen added: “This is another major step towards building a digital economy open to all in Italy, leveraging the broadband expertise of our Eutelsat Broadband unit. There is a strong history of Franco-Italian co-operation in the space industry and we are delighted to be working with Poste Mobile to use the latest generation of satellite technology to address a very real broadband challenge. We at Eutelsat are very proud of being at the forefront of a Europe-wide effort to propel our continent to the next level of the Digital Age.”

Eutelsat benefited from the legal assistance of Alessandro Comini of BakerMcKenzie.

* According to the latest data from the Italian Ministry of Economic Development (June 2013), the percentage of Italian residents not covered by broadband services through a landline or mobile broadband services (provided by operators of third-generation, fourth-generation or WiMax services) is 4% (Digital Divide index). This equates to 2.37 million Italian citizens in 3,600 locations where broadband is unavailable or speeds are below 2 Mbps. 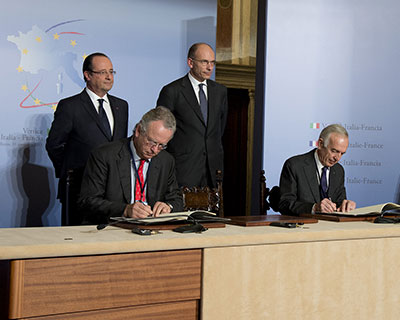 With capacity commercialized on 31 satellites delivering reach of Europe, the Middle East, Africa, Asia, significant parts of the Americas and the Asia-Pacific, Eutelsat Communications (Euronext Paris: ETL, ISIN code: FR0010221234) is one of the world’s leading satellite operators. As of 30 September 2013, Eutelsat’s satellites were broadcasting more than 4,700 television channels to over 200 million cable and satellite homes in Europe, the Middle East and Africa. The Group’s satellites also provide a wide range of services for TV contribution, corporate networks and fixed and mobile broadband markets. Headquartered in Paris, Eutelsat and its subsidiaries employ over 780 commercial, technical and operational professionals from 30 countries. Eutelsat has a longstanding presence in Italy with two teleports in Turin and Cagliari as well as support functions located in Turin, employing more than 150 people. The company’s HOT BIRD satellites already serve Italy’s leading broadcasters, delivering 368 Italian TV channels to eight million homes across the country. www.eutelsat.com

Eutelsat Broadband is the business unit of Eutelsat in charge of providing satellite broadband services to residential and professional markets, as well as to broadcasters across the European continent and the southern rim of the Mediterranean Basin. Its residential product tooway™ is the best in class satellite broadband solution and a unique cost-effective alternative to terrestrial access technologies in unserved and underserved areas, with download speeds up to 20 Mbps and upload speeds up to 6 Mbps. The connectivity needs of corporate customers and telcos are also catered for through the KA-SAT Access product line and its VNO and VPN solutions. Eutelsat Broadband also provides top-notch IP based satellite newsgathering solutions with its NewsSpotter service. Eutelsat Broadband reached the symbolic milestone of 100,000 active terminals on KA-SAT last August. For more information, visit: www.eutelsat.com/en/services/data/eutelsat-broadband.html.

Poste Italiane’s logistics and technology infrastructure is the largest and most extensive in the country, providing, in addition to postal services, integrated communication, logistics, financial, insurance and mobile telephony products and services to consumers, businesses and the public sector throughout Italy. With its network of post offices located throughout the country, Poste Italiane serves over 37 million customers. Its widespread presence around the country, extensive experience and use of new technologies, have enabled Poste Italiane to play a leading role in the process of economic and social development in Italy.

PosteMobile is the mobile operator of Poste Italiane Group. On the market since the end of 2007, it currently has around 3 million active customers.

PosteMobile develops and offers mobile information, transaction and communication solutions, integrated with a portfolio of useful services within the Poste Italiane Group.