Paris, 6 July 2014 – Following its successful launch on May 26, Eutelsat Communications (NYSE Euronext Paris: ETL) announces that the EUTELSAT 3B satellite is now fully fired up and providing commercial services at 3° East.

Eutelsat’s newest satellite is designed to increase and diversify capacity and reach of Europe, Africa, the Middle East, Central Asia and Brazil. The first commercial satellite to assemble Ku, C and Ka payloads in a single platform, it can operate up to 51 transponders through an innovative configuration that enables customers to select the frequency band most adapted to their applications and targeted service area.

Overnight transfer of customer traffic onto the new satellite from the two Eutelsat satellites already at 3° East (EUTELSAT 3D and EUTELSAT 3A) was completed in the evening of July 5. Having completed their missions at 3° East both satellites will now be redeployed. EUTELSAT 3D is already on its way to 7° East where it will be copositioned with EUTELSAT 7A to increase capacity and in-orbit security for customers providing DTH, professional video, data and telecoms services in Europe, Turkey, the Middle East, Africa and Indian Ocean islands. It is scheduled to go into service at 7° East in mid-July at which point it will be renamed EUTELSAT 7B. EUTELSAT 3A, will be relocated to 8° West until it is deorbited later in 2014.

Eutelsat Chairman and CEO, Michel de Rosen said: “With the full entry into service of EUTELSAT 3B we are further heightening the efficiency of our fleet and gearing new capacity towards our strongest growth markets. Clients providing services from  our 3° East and 7° East orbital positions can now benefit from new satellites at the top end of the range in terms of flexibility, power and reach. Our thanks go to Airbus Defence and Space for building EUTELSAT 3B and working closely with us during the satellite’s first manoeuvres, and to Sea launch for a flawless launch.” 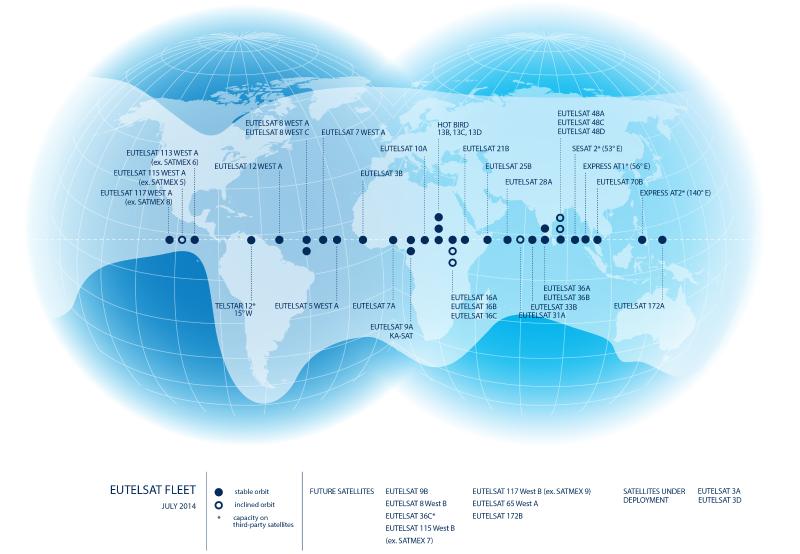 About Eutelsat Communications
Established in 1977, Eutelsat Communications (NYSE Euronext Paris: ETL, ISIN code: FR0010221234) is one of the world’s leading and most experienced operators of communications satellites. The company provides capacity on 37 satellites to clients that include broadcasters and broadcasting associations, pay-TV operators, video, data and Internet service providers, enterprises and government agencies. Eutelsat’s satellites provide ubiquitous coverage of Europe, the Middle East, Africa, Asia-Pacific and the Americas, enabling video, data, broadband and government communications to be established irrespective of a user’s location. Headquartered in Paris, with offices and teleports around the globe, Eutelsat represents a workforce of 1,000 men and women from 32 countries who are experts in their fields and work with clients to deliver the highest quality of service.
For more about Eutelsat please visit www.eutelsat.com